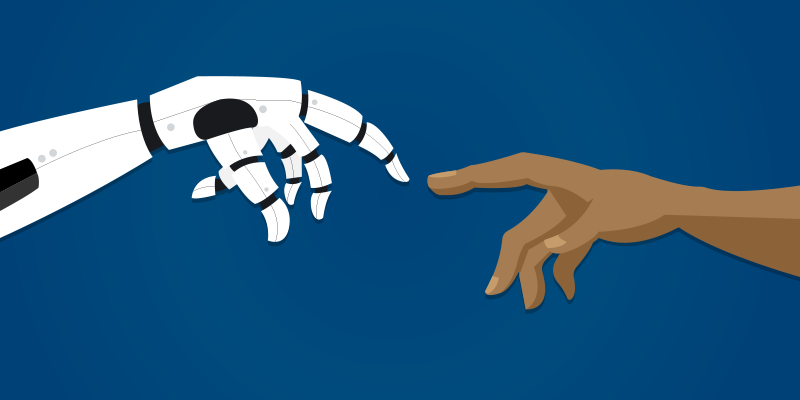 Let's talk about AI! Why AI? Well, it's incredibly popular and trendy. An analogy can be made between AI and when Coco Chanel rid women of the corset fashion to a sportier, chicer outfit. Risqué, scary, unheard of, but oh so liberating and exciting!

If you have been living under a rock without internet connection or communication device, you might be wondering what AI (aka Artificial Intelligence) means. The best definition I could find is the following... Once again from my favorite repository (Wikipedia):

"Artificial intelligence is intelligent behavior by machines, rather than the natural intelligence (NI) of humans and other animals. In computer science AI research is defined as the study of ‘intelligent agents’: any device that perceives its environment and takes actions that maximize its chance of success at some goal."

AI is the future, no question about that. Recent studies predict that AI will be a 14 billion dollar market by 2024. Yes, only seven years from now. Its growth is exponential. Similar to other industries that can benefit from AI, Enterprise CMS products must start building machine learning software or integration points for content contributors and end users alike. AI's level of accuracy in decision making based on product availability would create Recommendations and Personalization patterns as precise as they have ever been.

Technology is constantly evolving. And it's a fact that all Enterprise CMSes can be improved in their current states. But is that what we really want? Do we want to fix the bugs and process flaws? Keep releasing patches upon patches? Or, do we want to build an ecosystem as far-reaching as possible using machine learning, tapping its knowledge base from end users, the internet, and trend behavior analyses?

I would argue for the latter.

All three definitions are faithfully reproduced in the Content Management Systems products of today. However humans’ perceptions and expectations have changed and evolved. Communication platforms of yesterday were largely text based whether it be big PDF files or prints. Today's world, on the other hand, is all about images, quick videos, and short copy that conveys a clear message loudly and concisely. Information is shared. Copied. Inserted. Digested. Today's consumer doesn't have time to ponder and will only remain or frequently visit your web/mobile application if your content is relevant and easily consumable. The combination of tablets, mobile devices, and widespread internet connection has created a more connected world that craves content that's constantly fresh, new, exciting, and relevant.

Communication platforms of today are immersive. Facebook. Instagram. Sharing. Tagging. Liking. Informing. Imagine the amount of data consumed daily by their users and their servers. It is literally mind blowing in the highest terms. Content is enterprise side and end user side. It's the combination of the enterprise’s efforts in putting information together and the end user's reaction to that information. Reaction which will thereof create more content to be collected by the enterprise. Even the number of hashtags directed to an organization is a piece of content that requires mining and analyzing.

So, how do we bridge AI and Enterprise CMS? To help answer that question, let's take the example of an e-commerce application. Chances are that it's leveraging content forms. A set of fields that content contributors know all too well and work on daily to feed templates. The attributes that belong to the form can be filled in by IBM’s Watson (a cognitive system that promises to improve the partnership between people and computers). With the amount of information Watson already has gathered, we can trust its knowledge base and decision making process. Now let’s make the form disappear, or at least be used minimally by content contributors. Is it magic? Not quite. A machine can now store, organize, and nurture datasets. No more naming conventions. No manual workflow process to be followed as they will all be automated. Less building of hundreds, thousands, or millions of content instances one-at-a-time; now in bulk but still in a heavily-monitored environment. The goal being increased efficiency and speed within the realm of connected machines.

As content sometimes gets lost and replicated or misused, keeping track of one’s content repository becomes primary. Old and new. It starts with a bullet-proof tagging system added to a tracking strategy as content moves from device to device, individual to individual, country to country. Specifically: context to context. By leveraging Artificial intelligence and machine learning, tagging a piece of content will prove more granular than ever before as perception/behavioral analyses are combined with facts that can create a wealth of information tapped by Enterprise Content Management Systems at the service of disseminating information cohesively. Tagging is the one word that everyone agrees upon in the CMS world. It reaches out to other practices that rely heavily on efficient tagging of data, such as search optimization and analytics. Tracking, on the other hand, would provide accurate numbers as to the content reach. The Who. The Where. The How. And, the What.

Answering the questions above will give organizations complete control, allowing them to make business-critical decisions based on accurate data.

The keywords - that newly-define content - are widespread (as you have undoubtedly noticed). Together they form a cohesive bulk that will bring enterprises further ahead in influencing consumers. As you can tell, my new definition of content is entirely based on the evolution of technology and its impact on human behavior and perception. Expectations have changed, and so should our CMSes. In a few years, this article will be obsolete. And that is indeed exciting. Bring on the new. Pioneer or Adapt. Do not lag behind.