Drupal Coming Soon to a Phone Near You!

Happy new year everyone!  With the start of 2014 comes the much anticipated release of Drupal 8.  While the official release date hasn’t been determined yet, it is being marketed as the most customizable and adaptable release of Drupal. The following features has been included that are particularly aimed to help End users/clients: Authoring – using the Spark project to review what was currently available in the market for out of the box functionality, Drupal 8 will allow in line editing which can be used for taxonomy and complex fields, and allows content updates to be made directly on the page.  The quick edit feature also allows you to click directly onto a field and edit spelling mistakes or any content issues without having to go back to the back end form as was the case in Drupal 7.  The content creation page has also changed, similar to the content editing pages found within WordPress. Mobile improvements – Drupal 8 allows you to now install directly onto your mobile device with a responsive install experience.  The image below displays the screen you would see when installing Drupal on any mobile device.  In addition to the install experience, the are many other enhancements for mobile devices.  For instance, a new responsive preview bar is currently in progress but will allow you to preview what the mobile view will look like prior to publishing.  Additionally, the administration overlay was removed and replaced with a more mobile friendly “Back to site” button which allows you to go back to the last front end page. 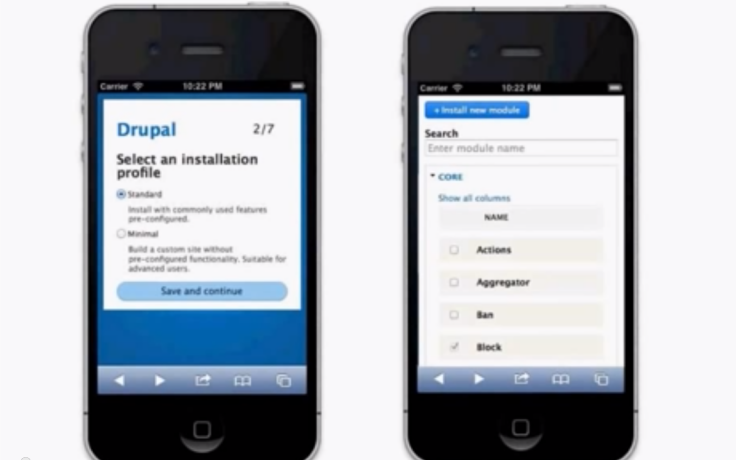 Multi-lingual support – From the initial install screen to image fields, Drupal 8 now allows you to install in your own language, as well as make content updates and translations.  The new multi-lingual support also allows for software translation updates to occur automatically. Designers and Themers can also enjoy features of Drupal 8 tailored specifically for their needs such as: HTML  5  – New form elements now allow you specify different types for fields types such as date/time etc. using picture element support. Customized Views  - With views being built into core, you can now easily customize admin listing, sidebar content, image galleries, slideshows, admin pages and more with no code. Twig – Templates can now be written in this syntax which brings flexible, fast, and secure Drupal theme building.  This will replace the PHPTemplate and will reduce disk access since it allows for templates to be compiled down to the PHP code.  Learn more about Twig here: http://twig.sensiolabs.org/

One important thing to note with this release is that IE 6 and 7, and most of 8 will no longer be supported.  This will allow for more complex and efficient CSS and JavaScript to be available and reduces the amount of time that is currently being used for IE 6 and 7 bug fixes.  For a listing of IE 8 features that are no longer supported, please refer to the following link: http://caniuse.com/#compare=ie+6,ie+7,ie+8,ie+9 Last but not least, onto the new features targeted towards developers!! Configuration Management – Improvements will allow you to take a snapshot of the drupal confi at any given point in time allowing changes to be deployed via version control. Symfony2 framework integration - Now be offered in Drupal core allowing partial page caching, better performance, multi-lingual support, and easier maintenance of Drupal core.  Also allows you to easily include third party components. So when is this release happening exactly?  Keep an eye on the Drupal core release cycle which provides important information on the release of Drupal 8.  With the beta version scheduled for early-mid this year, the release has been targeted for late 2014 so get ready to upgrade and migrate your content! Drupal core release cycle - https://drupal.org/core/release-cycle Release cycle FAQs - https://drupal.org/node/2075535 Ways to get involved - https://drupal.org/contribute
Tags: Drupal, Drupal8