A BACnet Spec for Drupal

pittsburgh.pa.us | VIBRANT over the Ohio, Monongahela and Allegheny Rivers.

Pittsburgh is a cool city.  It has rivers, museums, tunnels, bridges, trolleys, universities, mountains, inclines, sport stadiums ... and from any of these you can glimpse its awesome skyline.  Internationally, it may best be known as home of the Pittsburgh Steelers. WIRED magazine listed it as a Top 10 Tech Town in the USA. But, before discussing the relevance of BACnet and Drupal to cities such as this, I’d like to first nominate Pittsburgh as the new, smart Energy Capital of the World.

Energy has driven Pittsburgh's industrial development for the last century and more. The PA coal industry, be it hard or soft, once thrived thru-out Pennsylvania and was burned to great profit by the Pittsburgh steel magnates of old. Forging rails to discovery, defenses to war and structure to cities, Pittsburgh steel opened up vast territories to trade, protected that thru world wars and framed city skylines locally and abroad.  Everywhere, coal fueled this industrial revolution.

Then, a newer form of energy was discovered in “The Valley that Changed the World”.  Just upstream from Pittsburgh, near the headwaters of the Allegheny River, “They struck oil”, PA Oil.  This boom changed the world forever by fueling a whole new realm of discovery into personal forms of transportation.  It created an insatiable demand for oil that quickly dried up PA oil wells and motivated the search and development of vast new oil fields all over the world as people began to understand what to look for and why.

Today, more energy from the fossil fuel reserves surrounding Pittsburgh has captured the world’s attention. This time natural gas derived from PA Shale and the tech enabling it has taken center stage.  The Marcellus Shale formation surrounding the city has brought new prosperity to the entire region and promises more to come.  Its development is maximizing the USA security profile by minimizing its dependency on foreign oil. This newfound confidence and wealth has peppered the skyline of Pittsburgh with new construction projects of which the Tower at PNC Plaza is most prominent. 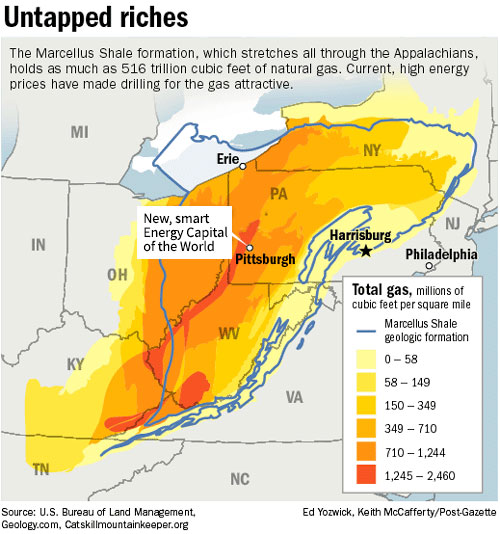 An energy promise is fully integrated into the design (form-function-feeling) of this new PA Tower. “Rising approximately 30 stories near the confluence of the Allegheny and Monongahela rivers, The Tower at PNC Plaza will represent the innovative and pioneering spirit of Pittsburgh and PNC’s commitment to that community.” Yet this promise is not of the untapped riches of Marcellus shale. Nor of a cleaner more secure future using natural gas over oil or coal.  PNC’s promise is that “The Tower will be MORE than the world’s greenest skyscraper”.
More than Green?  How can an institution such as PNC, who’s entire reputation is built on trust, make such a bold statement?  Well, the answer is now well documented. They did their research !!!

“Energy-Efficiency Study Shows That When Equipped With Necessary Tools, PNC Employees Consume Less Energy”.  This study by Pittsburgh’s own Carnegie-Mellon University shows that, when it comes to saving energy,  human behavior is actually as important as the physical characteristics of a building.  The research “demonstrates the potential for employees to drive energy and cost savings," says Nana Wilberforce, PNC's energy manager.  It also highlights an opportunity for PNC and other companies to increase energy efficiency through education, as well as the adoption of the right technology.  The results demonstrate that by opening up knowledge and control to the individual they will exert a tremendous long-term influence on energy.  In this study Group Four, which received the most information and control, reduced overall energy consumption by 38 percent.

Smart energy concepts, which give people information and control, are now framed in the Pittsburgh skyline.  Looking beyond the plug-load studies of office workers by CMU or those of children by Penn State, its no secret that the building automation industry has already developed and installed a substantial infrastructure to support smart buildings over the last two decades.  Using such tools as the NISTIR 6392 publication “GSA Guide to Specifying Interoperable Building Automation and Control Systems Using ANSI/ASHRAE Standard 135-1995, BACnet” (Bushby, Newman, Applebaum) many architectural engineers are even proficient at integrating information and control into all their building designs.  However, this GSA guide to specifying BACnet now requires updating to properly equip professionals with the tools required to specify this new smart energy. 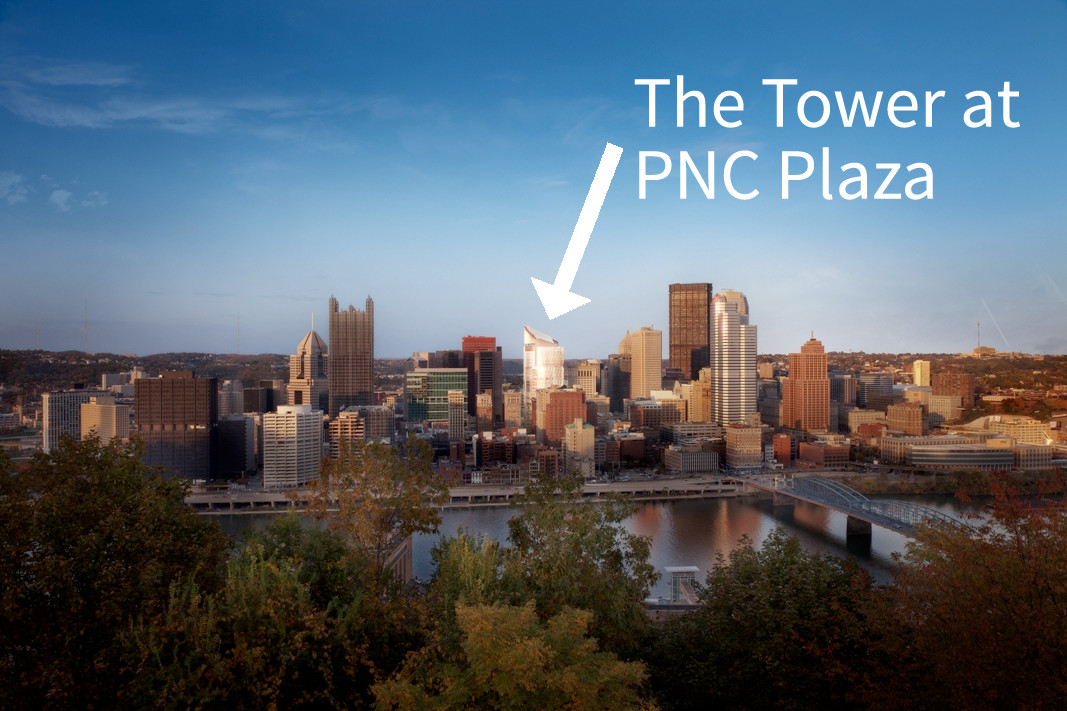 The concept of "Smart energy” may be framed within the CMU study, but not explicitly. The study sidesteps BACnet, which as a smart energy technology was probably designed into the new PNC Tower well before the CMU study began.  And, its results seems to support the notion that smart energy is dependent on professionals integrating interactive games for children (staring chickens) into their designs.  Yet professionals do regularly integrate BACnet systems into buildings both in Pittsburgh and the rest of the world for a reason.  They give the owner substantial control and lots of information, which translates into energy savings when properly managed.  The CMU study is brilliant in that it demonstrates when owners go beyond the status quo of industry standards and entrust more people with more open information, they can get more savings as smart energy.  In other words, smart energy is open energy.

The feature article entitled “Drupal – A (BAC)net Gain” published January 2015 in the BACnet International Journal (Issue 09) seeks to provide background as to the WHAT and WHY questions for combining BACnet and Drupal.  To answer HOW, I simply wish to start the discussion with this blog and point owners and their design professionals to the sample spec located at www.bg-drupal.org.

This simple three page document is an example of a real BACnet spec for Drupal.  It provided the basis for a proof-of-concept that was later translated into the BACnet module for Drupal. The spec requires careful edits by the design professional to assure it meets the customer's expectation.  This particular spec could be used so that an existing project, with a completed design, can add smart energy into their project as either an “Alternate” (if the project is currently released for bidding), or declared as a “Change Order” (if the project is currently under construction).

Free on-line tools have been available to simplify the job of specifying BACnet for several years. In the “Building Energy Software Tools Directory” maintained by The U.S. Department of Energy one can find listed my favorite, CtrlSpecBuilder.  This software can be used to generate “specifications that are open and non-proprietary”.  To adequately ensure “smart energy” can be mined from your next project the following features must be in your BACnet system specification.

A Web Services Spec for BACnet  (from CtrlSpecBuilder)

Please note that this portion of a BACnet spec goes beyond that described in the NISTIR 6392 document mentioned earlier, and prescribes the inclusion of BACnet Web Services as part of the project.  If you want to include smart energy in your next project, and use the BACnet spec for Drupal, you must make it a point to require that the B-AWS (BACnet Advanced Operator Workstation) not only conforms to the standards established by the BACnet Testing Laboratory, but that it also requires inclusion of BACnet Web Services, similar to that described above.  Testing for BACnet Web Services is not a service presently offered by the BTL but can easily be incorporated into your next building project by a knowledgeable design professional, and can be furnished and installed by a few BACnet vendors conducting business in most cities all over the world today.

Beyond this, your “BACnet Spec For Drupal” should clearly call out the number and types of points to display to everyone thru Drupal.  Remember the objective here is to engage the maximum number of users by putting some real-time energy data into the company sites they are already visiting routinely.  To accomplish this a smart energy block, displaying live energy related data, along side the main content of the page will likely draw a higher number of hits per hour than dedicated pages that restrict themselves to energy data alone.

Building owners can now harvest smart energy without incurring the cost of any additional software or buying any additional hardware devices.  It requires no digging, drilling or fracking.  Smart energy can be extracted from existing facilities simply by getting your building operations people (knowledgeable about their BACnet systems), to have open constructive talks with their counterparts in IT (who are knowledgable about their Drupal systems).  Again, no material costs and no assistance from outside vendors is required.  However, building owners should realize that there is a learning curve associated with implementing best practices of this technology, and it may overwealm those tasked to do this for the first time.  So just grab the spec and call a consultant.  At a savings rate of 38% the smart energy reward will quickly cover that cost!

BACnet has been required in federal, state and municipal construction projects for many years, and as in the case of the Tower at PNC, which is 90% complete at the time of this writing, probably has already been integrated into the project.  Drupal, with over a million web sites on-line today, is probably already being used by your institution.  If not, you should seriously consider what this Drupal thing is.  Since you likely have BACnet and Drupal infrastructures already in place, why not "join" them to extract smart energy from your facilities today.

So, I like Pittsburgh, its history and its people.  Its skyline at night is awesome from any angle.  Its history from an energy perspective is epic.  And, like those who have built BACnet and Drupal into the open systems they are today, it’s the Community that makes them special.  Pittsburgh, as it embraces the success of its past and empowers its community for a vibrant tomorrow, will become known as the new, smart Energy Capital of the World today.